10 THINGS YOU MUST DO DURING SUMMER IN ALBERTA Alberta is one of the western provinces of Canada that’s unlike any other. With quaint towns, rugged mountains, immense forests and extreme wildlife, Alberta is the place for any nature lover.

Much like most of Canada, Alberta’s landscapes drastically vary depending on the season. During my visit, the temperatures were warm and sunny with clear blue skies, but the winter often depicts a very different vibe.

With extreme freezing temperatures and huge amounts of snow, the landscapes and surroundings become a totally different scene. So, here are 10 things you must do during the Summer in Alberta; when the wildlife emerges, the skies are clear and nature in the rocky mountains is out in full force. The Icefields Parkway AKA. Alberta Highway 93, is one of the most well-known attractions in Alberta. This 268 km highway travels through the spine of the rocky mountains – It begins in Lake Louise and ends in Jasper, through some of the most breath-taking Canadian scenery imaginable; it’s considered the most epic road trip in the whole of Canada!

Everything from Jasper National Park to the Athabasca Glacier and the Columbia Icefields will really leave you speechless. It showed me some of the most memorable landscapes I’ve ever seen. During the summer the peaks are often still snow-capped, but the roads are clear, the sky is blue and the wildlife really emerges.

Whether you drive the road yourself or with a tour company, the Icefields Parkway is something you really can’t miss. Canada really is full of some incredible wildlife. Summer is the best time of year to see animals in the country as this is the month that they come out to play. Bears are in much lower areas and grazing for food, elk are in the beginning phases of the rutting season, and the whale watching period is in full swing.

On my summer trip to Alberta, I encountered so much wildlife just by simply exploring the woods. Driving on the roads, hiking and even just walking through the towns will give you the opportunity to see Canada’s native animals before many hideaway in the snow. I do have one tip though…

I do have one tip though… make sure you bring bear spray.

Visit Sled Dog Kennels in the Off Season When thinking of things to do in Alberta, a very popular activity to do is dog-sledding.

Unfortunately in the summer, there’s obviously no snow, so this activity is not always available. Instead, during the warmer months, the kennels operate tours of their grounds while the dogs have a rest from all of their hard work during the winter. Some kennels still run dog-sledding with road-style sleds, which may be something of interest. But otherwise, I highly recommend simply visiting the kennels and enjoying some time with a bunch of adorable huskies!

A lot of people really miss their pets when they’re abroad, and this is the perfect way to get your fix of cute, fluffy, playful dogs.

I mean, who doesn’t want to play with over 100 Huskies?! It’s very important to ensure you’re visiting an ethical kennel though. Snowy Owl in Canmore is fantastic, but sadly there are many others that are very unethical. So please make sure you’re supporting a place that treats their animals well.

A horseback ride around the heart of the rocky mountains, does it really get any better?

This is another you need to ensure is ethical, and for those that are, I can guarantee you’ll have an experience that you’ll never forget. Through the alpine meadows, quaint rivers and surrounded by wildlife and the beautiful Rockies. You’ll be submerged in the heart of nature in a way that the explorers of the country once were. The most picturesque location in all of Alberta – in my opinion anyway. This incredibly famous glacially fed lake is surrounded by drastic glaciers, mountain peaks, walking trails and the very beautiful Fairmont Chateau hotel.

For those who aren’t staying at this type of expensive accommodation (although I would highly recommend it), a visit to this lake is something that surely can’t be missed. The town of Jasper itself is very quiet and quaint, but the National Park is home to the most photographed landmark in the entire Canadian Rockies – Spirit Island. That says enough in itself right?

During the winter this part of Alberta is completely submerged in snow. The summer times allows you to experience nature to the absolute fullest. Much like Jasper, Banff National Park is filled with extreme wilderness, incredible views and very rich history. Banff is a much larger and more active town than Jasper, and also has a lot of landmarks that you’ll surely recognise.

It’s home to the beautiful Lake Louise that’s mentioned above, along with both Peyto and Moraine Lake too. All three are incredibly vibrant in turquoise colour due to the many glaciers that surround them.

This is the most visited park in the whole of Alberta, with over 3 and a half million visitors every single year!

To discover more of this magical place, here are the best things to do in Banff in the summer!

Located 35 km east of Edmonton, Elk Island National Park played a very important role in the conservation of the American Bison many years ago. The park is now home to the densest population of hoofed mammals in Canada; with coyote, bison, moose, mule deer, lynx, beaver, elk, white-tailed deer and porcupine as year-round residents.

During the summer in Alberta, the wildlife in this park is much easier to spot. Animal lovers, this is the place for you! 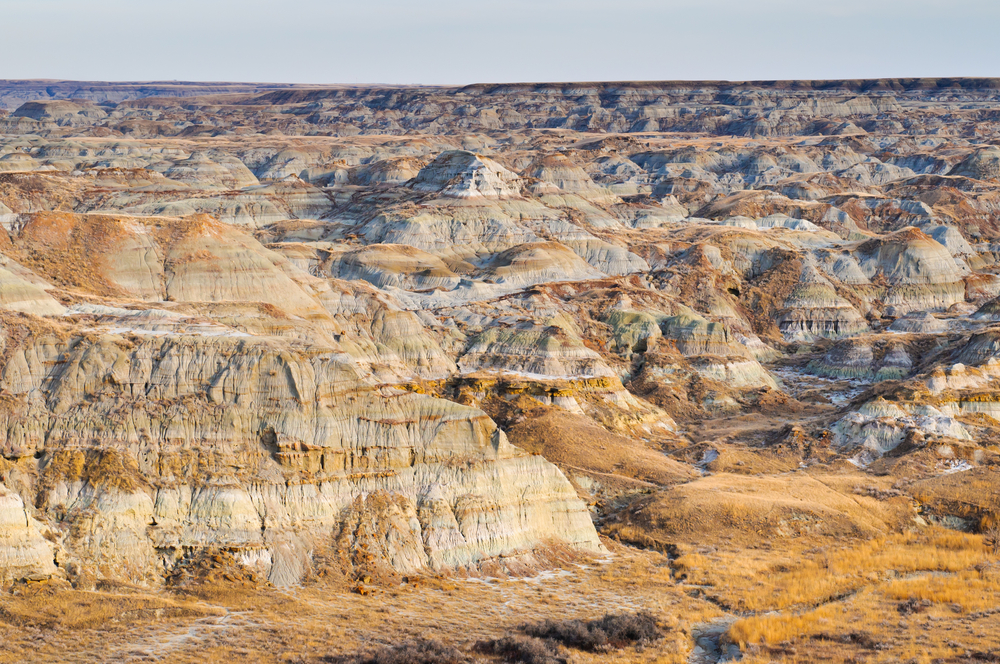 Founded in 1955, Dinosaur Provincial Park is famous for containing some of the richest dinosaur fossils in the world.

Located 2 and half hours south-east of Calgary, this fascinating park has been the source of over 500 specimens that are now found in many museums around the world; it’s 73 square kilometres of incredible nature and history. Alberta is the real heart of the Rockies – For those that have the ability to hike, it would be silly to come here and not even give it a go!

Whether that means going on the easy trails or tackling the extreme mountain peaks, this is the place to see a part of the world that has basically been untouched by man.

To get a little more inspiration, here are 25 photos of the Rocky Mountains that will inspire you to get out and explore!

What is your favourite thing to do during the summer in Alberta? 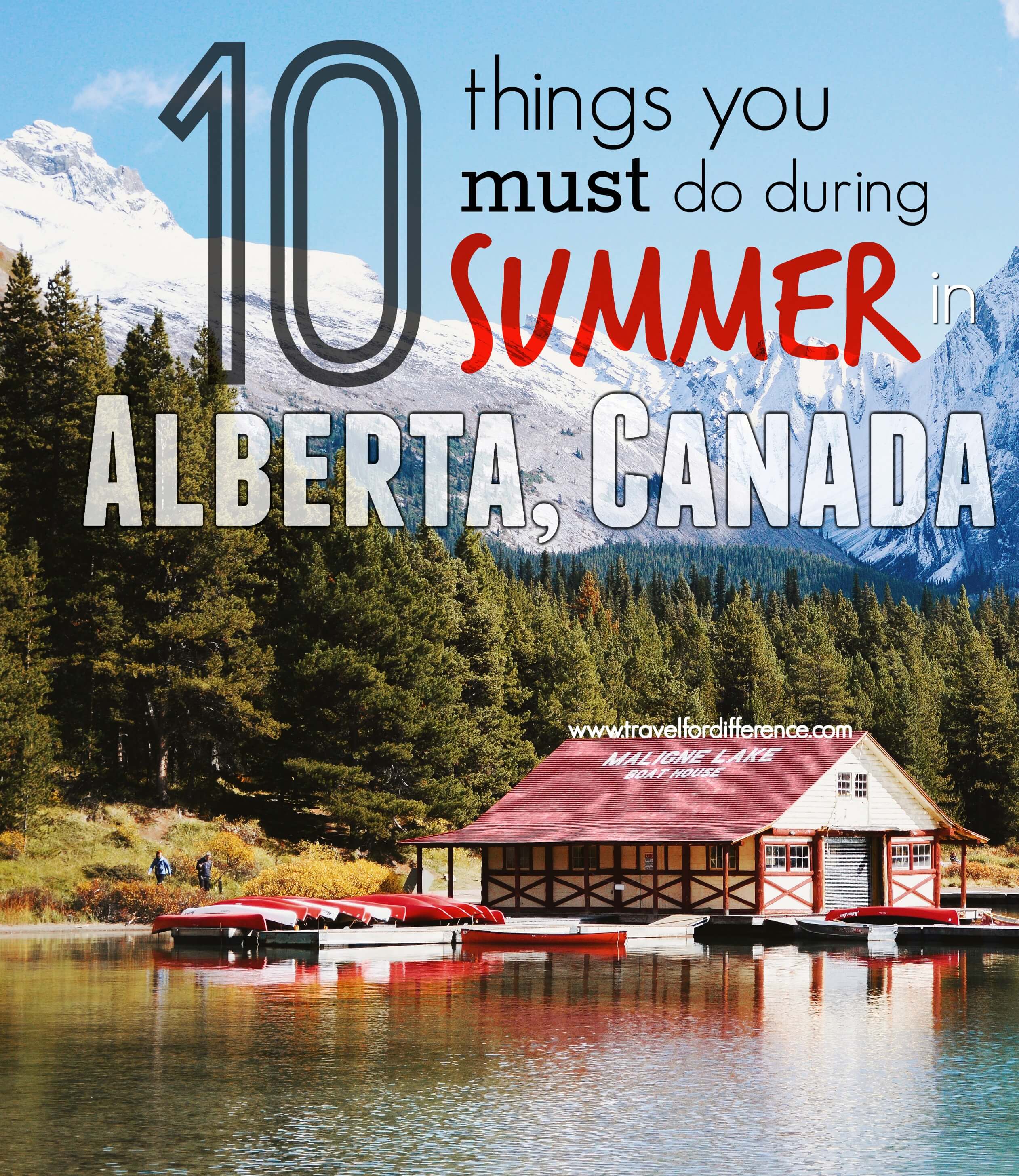