12 WAYS TO BE AN ANIMAL FRIENDLY TRAVELLER

When it comes to animals and wildlife, most travellers have good intentions… But sadly, many tourist attractions stem off a lifetime of animal suffering, abuse, and dreadful exploitation, all in the name of profit and greed.

Whether you are already aware, or whether this is total news to you, the ethics behind animal tourism is an issue that’s constantly evolving as tourists become more conscious. In order to avoid contributing to a world of harm to our fellow creatures, here are a few things to remember:

Wild and free, that’s how it should be!

No seriously, always choose the wild attraction over anything that’s set up for tourism. Go on a jeep safari, go out to the ocean, go to a national reserve or go to an ethical rehabilitation centre where the animals are rescued and rehabilitated into the wild. Give your money to organisations that put the animals first.

Seeing one wild animal that is thriving in its natural habitat is so much better than seeing numerous that are mistreated and abused. There is always an option for ethical wildlife tourism, you just have to make sure you choose it! Be aware of Greenwashing

There are many tourist attractions that label themselves as a “sanctuary” or an “orphanage” when in reality they’re nothing of the sort. This is a greenwashing tool and a marketing ploy to fool tourists into visiting their attraction under the idea that it’s ethical. As responsible tourism is becoming more and more important to travellers, companies will do anything to make you believe that their practices are principled and that they have the animal’s best interest at heart. But trust me, it’s not always the case.

Remember, the less interaction with the animals the better. For example: if you see an ‘elephant sanctuary’ or ‘orphanage’ that offers tourist experiences such as rides or bathing, it’s greenwashing at its finest.

From ducks to monkeys, just leave them be! It’s important to let them fend for themselves and not become comfortable with human interaction. It can not only be dangerous for humans when wildlife loses their fear of us, but feeding them can also spread harmful diseases to the animals if they’re given toxic ingredients.

It might be hard, but not feeding the wildlife is better for them in the long run.

Remember how privileged we are to be sharing this planet with such incredible animals. We want them to thrive in their natural habitats, so even if that means viewing from a distance, remember that that’s exactly how it should be.

Exploitation is not entertainment This should be common sense, but I’m going to mention it anyway. Leaving your trash around can cause animals to forage in the garbage, confuse it for food, and become incredibly ill from the toxins that they ingest. In particular, plastic waste suffocates, disables and kills thousands of animals each year… Don’t contribute to it!

Better yet, if you see trash lying around… Pick it up.

Yep, the sunscreen you put on your body can have detrimental effects on life below the ocean’s surface. Traditional sunscreen is full of toxic ingredients such as oxybenzone; just one drop in the equivalent of 6.5 Olympic swimming pools worth of ocean can kill baby coral. And as I’m sure you’re aware, coral is what makes up the ocean’s reefs, and those reefs are home to thousands of species of sea creatures… When you think about how many people swim in the sea whilst covered in sunscreen, it’s a pretty big problem.

The solution? Use natural sun protection that is zinc-based, or look for sun lotions that have a reef-friendly label! Read more about it here: YOUR SUNSCREEN IS DESTROYING OUR CORAL! Tigers, orangutans, elephants, sloths, tarsiers… It doesn’t really matter. If a naturally wild animal is being forced into human interaction and restrained for your enjoyment, it isn’t ethical. In most cases, these animals are drugged, abused and restricted from their natural environment so that you can get close, hold them, bait them with food and then take a selfie.

It’s a big no-no! So instead, take a selfie with a wild animal from a distance… Just get a bigger lens! It’s cooler anyway if you ask me.

Reduce your meat consumption (if you can)

I will never ever tell you what you should and shouldn’t eat, but if your goal is to be an animal-friendly traveller, reducing the number of animal products you consume is a great place to start.

Picking and choosing what you put on your plate is a huge privilege and avoiding it is a luxury that many don’t have, but if you can and choose to, this is undoubtedly an amazing way to be kinder to our fellow furry/feathery/hairy/slimy friends.

However, if that’s not for you, it’s best to make sure that you avoid eating cuisines that contain illegally poached animals. Be cautious of what you consume.

Book with an animal-friendly tour company

If you’re the type of traveller that likes to join a tour, here is a list of 200+ animal/elephant-friendly companies that are committed to moving away from selling and promoting cruel animal tourism.

Give your money to a company that cares deeply about animal wellbeing!

Be wary of souvenirs

Fur, ivory, shells, teeth, rhino horn, turtle shell etc. DO NOT purchase any product that’s made from animal parts. It’s vital that you know exactly what you’re purchasing and avoid buying into the dark industry of hunting for human greed.

Be curious. Always ask questions about animal welfare and don’t settle for anything that doesn’t sit well with your views and beliefs. It’s important to think holistically and remember that in other cultures things are viewed differently, but that doesn’t necessarily mean that you need to succumb to it.

Be kind and respectful in your discussions, especially to locals, but remember to stand firm to your beliefs. When it comes to tourism, tourists are the driving force… So speak up, ask questions and if you see something wrong, mention it! 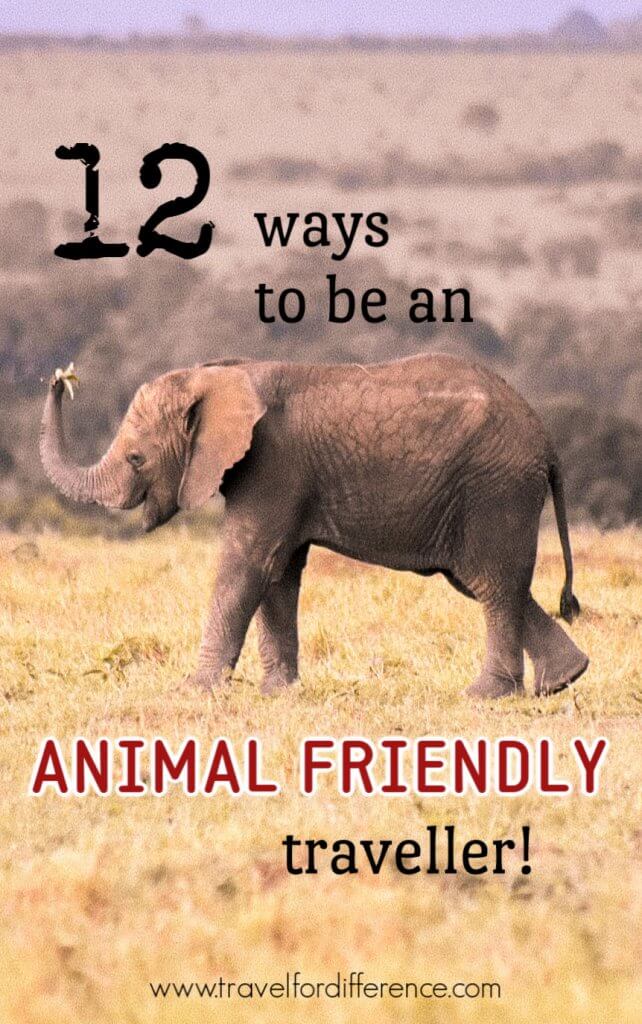