5 REASONS WHY I CHOOSE NOT TO EAT MEAT

I’ve been asked these questions numerous times: “why don’t you eat meat?” “why did you change your lifestyle?” “if you don’t eat meat, what do you eat then?” so instead of repeating myself, I thought it would be best to share my views in a totally non-confrontational way so that those who are interested can understand a little more about me!

I’m really not here to change your view – diet is a very personal thing and I couldn’t possibly judge someone based on what they put in their bodies.

All I want to do is share the things that I’ve learnt over the past 2 years so that you can make your own decision.

+ Animal Agriculture is the leading cause of Global Warming

Animal agriculture is responsible for 18% of greenhouse gas emissions, which is more than the combined exhaust from all transportation. Yes, believe it or not, this is one of the most destructive industries on the planet.

Not only does it kill billions and billions of innocent beings every year, but it is also incredibly harmful to the planet and the environment too.

Cows produce methane which is 25-100 times more destructive than CO2. And to put that into perspective, there are 1.5 billion cows on the planet… Which is 1.5X the number of cars.

They also consume more food than they produce, meaning that most of the farms around the world are not creating food for millions of starving people… But to feed the animals that we kill to eat. It takes 16 pounds of grain to produce one pound of meat. It makes no sense, right?!

After watching Cowspiracy, it’s evident that the environmental destructions caused by this industry are dramatically large. 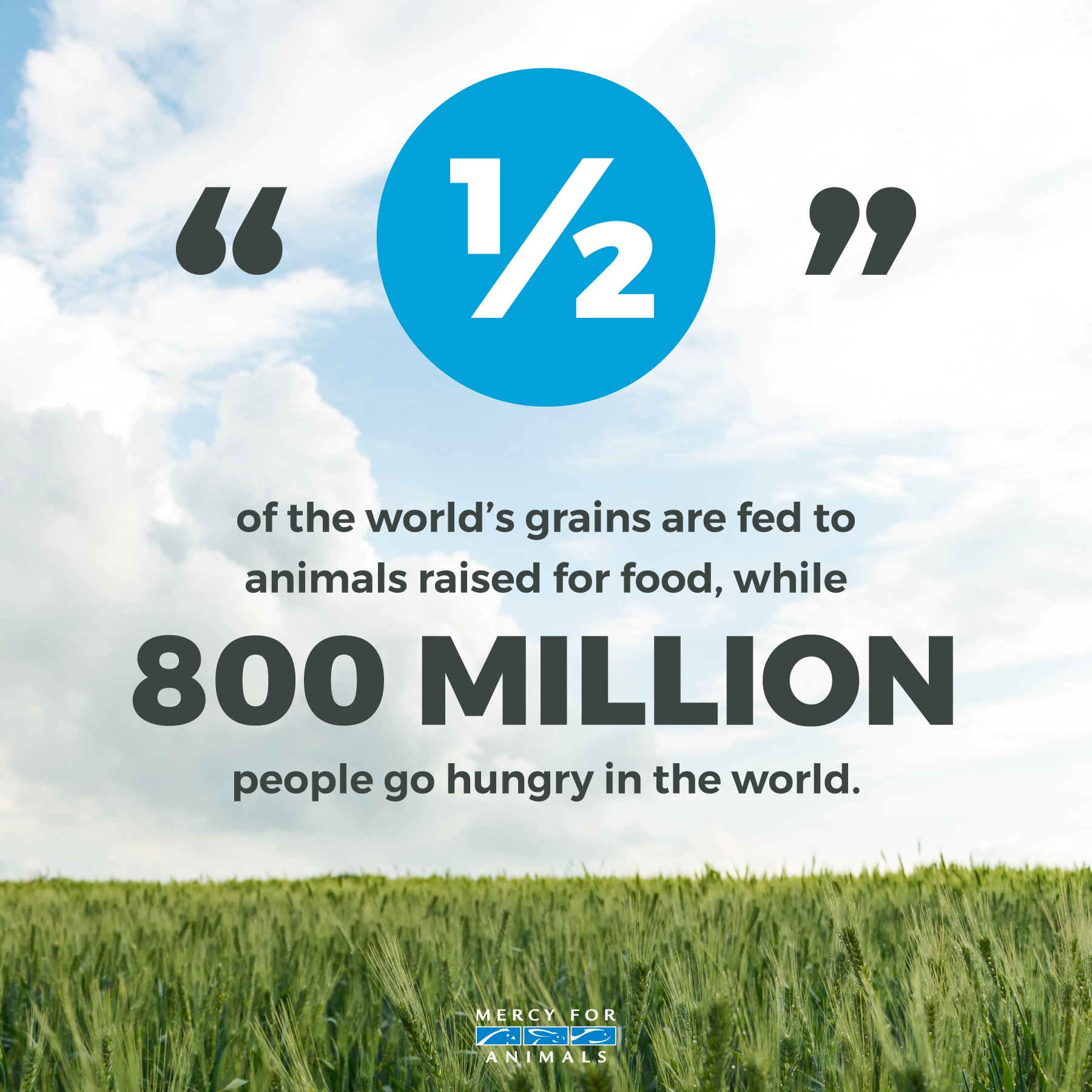 + I am not a carnivore

This may shock you, but hey… It shocked me too!

I honestly can no longer count the number of times that I’ve heard the argument that ‘the human body is designed to eat meat’… It’s the way that humans justify the death of millions of creatures. But here’s the thing…

Humans have the stomach, jaw, and physical features more on the wavelength of a herbivore. Our jaw is not equipped to rip and kill prey – nor are our teeth. We don’t have claws to hunt and capture a victim and to put it quite frankly… Majority of the world’s population wouldn’t eat meat if they had to kill it themselves.

I’m certainly not arguing that we are 100% herbivores because yes, the human body can process meat, but as this article clearly proves… We are natural plant eaters through and through.

As a famous activist once said – “put a 2-year-old child in a crib with an apple and a rabbit… If it eats the rabbit and plays with the apple, I’ll buy you a new car”.

Yes, it may put it in its mouth as all babies do, but no child will ever bite, rip apart and consume a live animal when there’s a tasty apple next to it. If you want to test out this point, I ask you to go over to a cow with nothing – kill it, rip it apart with your hands and teeth and if you do it with pleasure and enjoy the taste of its raw carcass, I can guarantee that this post will be deleted in 2 seconds flat.

Yes, the human race has evolved with technology and tools, but when you strip it back, it’s not in our nature to kill unless it’s essential for our survival – and it’s 100% not.

When you see a dead animal on the side of the road, do you feel hungry? Of course not! It’s only desirable to us because it’s convenient to go to the supermarket and buy a piece of steak.

Essentially what I’m trying to say is… Guns, gas chambers, torturous machines, technology, supermarkets and physical advancements do not make us carnivores – just because we have the tools to kill doesn’t necessarily justify it.

Slaughter is slaughter. Death is death. There’s, unfortunately, no humane way to murder.

Before you get upset or frustrated…

No, I’m not the type of person to make meat eaters feel uncomfortable when they’re consuming their meal. I’m surrounded by many meat eaters in my family and I strongly believe that your diet is your choice.

However for me now, the thought of consuming meat myself makes my stomach turn inside out.

I stopped eating meat about 2 years ago, and before that, chicken was the only animal I enjoyed the taste of. Now, after forcing myself to understand that what I was eating was the body of a murdered being, the thought of tasting their flesh has become quite repulsive to me.

Today’s society has manipulated us into disconnecting ourselves from the animal – that bacon is bacon, pork is pork, beef is beef.

I’m sure if the plastic wrapped meat that we purchase from the supermarket was labelled with something like “murdered cow flesh” or “gas chambered pig” or “decapitated chicken boob” or “hen period” or “12-week-old baby sheep that was stabbed in the throat”, then maybe we would all question our choices.

We have become totally desensitised from what happens to the animal before its dead body parts are placed on the supermarket shelf, and that’s the entire problem.

So now that I’ve educated myself on what really goes on behind closed doors – seen the footage of the torture that is classified as “humane” – the thought of unnecessarily eating a creature so innocent breaks my heart into a thousand pieces. + I don’t want to discriminate species

At my home in Australia, I’m surrounded by dogs, cats, cows and horses every single day… And I love them all.

It absolutely blows my mind that humans have developed into beings that can cry at the thought of the dog eating festival in China but encourage the murder of billions of pigs, cows, sheep and chickens at every meal.

How have we come to love one animal like it’s part of the family; cry at the thought of it in pain, grieve when it passes away and keep it safe and warm regardless of the circumstances, but kill the other because we like the taste.

People say that some animals aren’t smart; that humans are warranted to kill because we’re much more advanced. Or maybe because animals aren’t as intelligent… Well here’s the thing!

Animals grieve, love, communicate, teach and respect each other just as human beings do. Their organs work similar to a human, so what makes us assume that their brain doesn’t work like ours too?

For me personally, I feel that I have absolutely no right to take the life of a living being for the purpose of my greed – when there’s so much information showing that it’s so far from essential to be healthy.

“The idea that some lives matter less is the root of all that is wrong in the world” – Dr. Paul Farmer

+ I want to be a peaceful, compassionate and kind human being

To put things simply, I want to be the very best version of myself. And for me to have peace, I don’t want to cause harm and unwarranted death to any living being.

I want to be kind, loving and compassionate to all lives on earth – no matter our differences. I want to reach the end of my life knowing that I didn’t willingly contribute to an industry that does nothing but destroy.

For me to be the person I want to be, encouraging the death of billions of creatures cannot be part of the equation. Being compassionate to all living beings is something I strive for in life – regardless of the species.

In the end, this a personal choice that I have made to ensure that the rest of my life is lived without destruction. In my eyes, every being is worthy of love.

So to conclude this, I once again want to clarify that these are my choices and opinions and nothing more.

I’m 100% aware that having the ability to make these lifestyle choices is a massive privilege. And that’s why I’ve chosen to use my privilege as a way to lessen the destruction that millions may never be able to.

If you disagree, that’s okay… I’m not a judgemental person and all I ask is for you to do the same!

But for those that are interested, here are the 2 documentaries/videos that convinced me that this was the only way forward in my life. If you feel like watching, I encourage you to do so with an open mind ♡