AUSTRALIA DAY – DO WE NEED TO CHANGE THE DATE?

The controversy surrounding the topic of Australia Day this year was something I’m sure you’ve all heard ⏤ well for those of you who are in Australia anyway ⏤ because the conversation quickly turned from a whisper to a very loud scream. All of a sudden after years of cries, the Australian population slowly began to realise the significance of Australia Day to Aboriginal people.

For those of you who aren’t aware of what the 26th of January signifies for Aboriginal people, it was a day back in 1788, that the slaughter and desolation of their people began.

It’s a day that signifies the arrival of the first fleet; a day that the British flag was raised in New South Wales and Aboriginal people were treated like animals, slaves and swatted away like flies. It marks the beginning of destruction, the brutal act of genocide and the end of all that they once called home.

So, on this day when over 97% of the population is deep in celebration, the people who held this land before us, are mourning the loss of their freedom.

What I was also completely unaware of, was that Australia is the only country in the world that uses the landing of Europeans as their national day. For every other country, their national day is the day on which they settled independence. That’s enough in itself, right?

Here are a few of the arguments that were put into play when the topic came up:
“It’s never going to change the past” ⏤ “We can’t please everyone” ⏤ “For 71 years this has been Australia Day, why change it now?” ⏤ “What’s the point?”

Well. My question to you, without being brash, is simply, why not?

I don’t know a single person who thinks about what Australia Day actually signifies on the 26th of January. It has virtually no symbolic meaning to white Australians. The only thing that crosses our minds on this day is merely the fact that it’s a day off work, an excuse to get drunk and to dress up in tacky clothes covered in the Australian flag… Which is the entire problem.

Let’s be honest, what difference will it make to the population who aren’t suffering, if it was just moved one day? You will still get your day off… It will just be on a day that doesn’t symbolize genocide and brutality.

The controversy really does baffle me. The fact that people can be so against something that will never truly affect them, but that will affect the people who originated this land in a way of sheer anguish ⏤ is far beyond my belief. These people were here long before us; their ancestors were murdered, their futures torn apart, and still, we somehow have little to no respect.

It’s important to remember that yes, we are all Australian. But they are Australia’s history.

Our non-Indigenous population will never be negatively affected by a simple change of date. It’s merely nothing more than an inconvenience.

There will always be a day of the year where you can be grateful for the country you call home, but the thing is, the day it falls on will make no difference. So why not choose a day that isn’t a symbol of genocide?

No, it’s never going to ever change the past, but if changing Australia Day is going to make Indigenous people happy, there’s really no downfall. Remember that quote “Compassion Over Comparison”? This is when it needs to come into play.

We ⏤ all 97.6% of the Australian population who aren’t Indigenous ⏤ wouldn’t know the difference if we were to take the 27th of January off work to get drunk and wear tacky clothes. But the entire Aboriginal population would.

Isn’t that all that matters?

I acknowledge the Traditional Owners of the land, and pay respect to their Elders, past and present. 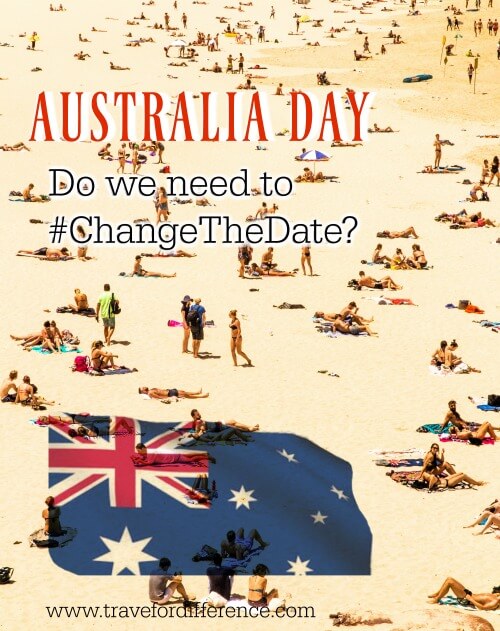