MY EXPERIENCE WITH MUSLIMS IN DUBAI

Today, as I’m sure you’re well aware, we are currently living in a world that is screaming constant social alienation and hatred toward people that have particular religious beliefs. It’s an extremely disheartening and deeply concerning climate that we’re faced with, and finding positive stories and experiences in the media doesn’t occur too often.

I visited Dubai, the largest city in the United Arab Emirates, for just a few days. Without originally knowing, the duration of my visit was spent in the holy month of Ramadan. It was my first time in an almost entirely Muslim country and I had no idea what I was going to experience.

I had never heard anything negative about this country, nor was I open to letting the negative views on Islamic culture get in the way of my travels.

For those who are unaware, Ramadan is the 9th month of the Islamic calendar, in which all Muslims around the world participate in fasting from dawn til dusk. During the hours of fasting, this time is to be used for prayer, charity, spirituality, and the purification of the mind, body and soul.

For tourists, this month is often a little difficult to manoeuvre. At first, what I had flown into felt like a city that was literally on food lockdown. Due to this incredibly important month of fasting, and such a high percentage of Muslims in the country, all food outlets seemed to be shut off from the world.

And yes, for those that are wondering, the same occurs whilst experiencing Ramadan in Qatar and other middle eastern countries too!

But before having the chance to stop and think about what this holy month could mean for the trip, it became clear that Ramadan really isn’t all that difficult to manoeuvre for people of other religions.

The UAE’s official state religion is Islam, although, all of its residents have the freedom to practice other beliefs as they wish without displaying conflicting views. So, what I thought was going to be a few days without a scrap of food in daylight, was merely proof of my ignorance. In shopping centres, hotels and other popular areas, there were numerous food courts, small restaurants and cafés open specifically for those who practised other religions, or who were like me, non-religious.

These locations were completely barricaded, hidden and secluded from the public eye in respect for those who were participating in Ramadan. This month is so important for Muslims, so going to extreme measures to ensure the regard of these people during this time is crucial.

But, as I quickly became aware, the respect of other religions is also never compromised.

It was a strange experience to be in a country during one of the most important months of the year, but to me, travelling is about accepting diversity. My trip was spent dressing modestly, drinking water in privacy, eating in specific locations and listening to Islamic prayers over intercoms.

I travelled just as I would have in any other country in the world, without any differences, except for simply abiding by the culture that I had intentionally pulled myself into. From what you will often hear throughout society, Muslims are often negatively displayed to be intolerant people that fail to accept others’ beliefs and ideologies. But for me, what I experienced was far from that.

I’m a non-religious person and was completely accepted for that throughout my time in Dubai. When in taxis, stores and strolling around the streets, all of the people I encountered were open to discussing their beliefs, talking about their culture and having kind and friendly conversations about my background too.

Women would chat in the line of clothing stores about feeling faint whilst breastfeeding and fasting. They would talk about how it’s not necessary for pregnant, breastfeeding or elderly people to fast during Ramadan, but that they wanted to for the benefit of their beliefs. Needless to say, what I experienced was no different to any other country in the world. The only difference was that this city was full of people with the same religious beliefs.

I left the city ⏤ and the country for that matter ⏤ without a complaint in the world. I had nothing but admiration and praise for such a diverse, cultural and fascinating Middle Eastern city, but now that I look at it from a different view, there is something I can’t help but fail to understand.

Why is it that this particular country isn’t copping the common slack for being almost entirely Islamic ⏤ but all the others are? Why is it that we are still flocking to this city when the world is so evidently fearing Islam?

It’s so disheartening that such a large portion of the world’s population continues to show complete hatred and bigotry towards this religion in its entirety, yet, the most prestigious Muslim country in the world has made it to #4 on the list of most visited cities. Tell me, where is the logic in that?

The US and the UK are 2 of the largest tourism sources for Dubai ⏤ but these are also 2 of the countries that are fearing Islam the most.

It’s evident that we are far too quick to jump on an entire group of people due to the few who have extremist views, acts and intentions. I think many see this as the easiest option in order to remove the chaos we are frequently seeing in the world, but that is so far from the truth.

Why is it that we only fear Muslims that live in the Global South? If people think we need to remove all Muslim people from our westernised countries in favour of our safety, what about Dubai? Why is it that the ‘westernised world’ will travel to Dubai so frequently without any angst at all? Why is it that we are so quick to display fear of this entire religion, but only when they’re not providing us with a beautiful holiday destination?

Isn’t this enough proof that really, Muslims are not the people we fear?

If Islam is the horrific religion that it’s often portrayed to be, why do travellers continue to visit this country? A country that is populated with over 80% Muslims? After all, Islamic beliefs in Dubai are no different to those in any other Muslim country in the world.

Things such as displaying public affection, eating/drinking/smoking in public during Ramadan, dressing immodestly and being a homosexual (or being caught as one) are all considered unlawful in the UAE. These are standard Islamic laws that you’ll see in every Muslim country, but of course, we don’t hate them when they have such a lovely place for a holiday, right?

We really need to recognise that Islamic extremists are those who inflict terror, and that these people only make up for 7% of the religion as a whole.

It’s terribly sad that Muslims and terrorists have been completely pushed into the same definition, and now differentiating the two is something that needs to be re-taught. Innocent Muslim men, women and children are constantly stereotyped due to their beliefs, but when they live in such a wealthy and appealing tourist city, the fear is utterly diminished.

To me, Dubai was one of the most interesting and futuristic cities in the world. To me, this city showed diversity, tolerance and understanding; even during one of the most important months for their beliefs. I felt welcomed, safe and completely respected.

Was this because I’m a white, westernised person? Perhaps. But instead of assuming my positive experience was due to my appearance (no doubt that this is a regular occurrence ⏤ I know white supremacy is a real thing), in this particular instance, I’m going to stop myself from assuming the worst from Islam. My positive experience was purely because I encountered kind, respectful Muslim men and women who respected me just as I did them.

There’s no doubt that terrible things have occurred in this city; in 2016 a very well-known transgender woman was completely denied entry into the country purely for being who she is. These things are demoralising, there is no doubt about it, but these are also things that occur all over the world, not just in Islamic countries.

More Americans are killed by white supremacists than by Muslim extremists… Yep.

There have been numerous cases of men and women being removed from their homes, interrogated for unquestionable reasons, victims of hate crimes, denied entry due to their beliefs and sent back to their war-stricken countries of origin, all of which have occurred in our very own ‘tolerable’ and ‘multicultural’ westernised societies.

It’s really unfathomable that this is what the world has come to; a place where we fear the entire Muslim population when it seems to affect us, and then it’s dropped when they create something we desire.

This religion is so frequently slammed for being intolerable towards other beliefs when we are the ones who are becoming increasingly intolerable. We seem to be following in the footsteps that Islam is continuously copping unrealistic hatred for.

Once again, my experience with Muslims was not filled with terror and threat, it was filled with kind and respectful people during a time of intense prayer and religion. They treated me as a human being, without sexism or disrespect that they are so often displayed as having.

As I’ve always said, there are many things that I don’t agree with within this religion and the many actions that have undoubtedly occurred by Muslims with extremist views ⏤ there really is no denying it. But can’t we just stop and treat everyone individually? The entire 1.6 billion Muslims in the world have not individually inflicted terror… A group of extremists did, and they are the people that we can understandably fear.

There are millions of men and women who haven’t done a single thing wrong ⏤ in Syria, Pakistan, Dubai and all Islamic countries around the world for that matter ⏤ who are constantly being defined by their religion’s extremists.

Of course, when unjustifiable, biased or downright horrific things occur, in no way am I standing with the people who participated in such crimes ⏤ no matter whether they are Christian or Muslim. But, until every single Muslim man, woman and child has proved to be harmful, sexist, terror-inflicting people, I will not let xenophobia win.

The moral of this story is that whilst I was in Dubai, I was treated as an individual human being, and it’s time that all Islamic believers should be treated like one too. 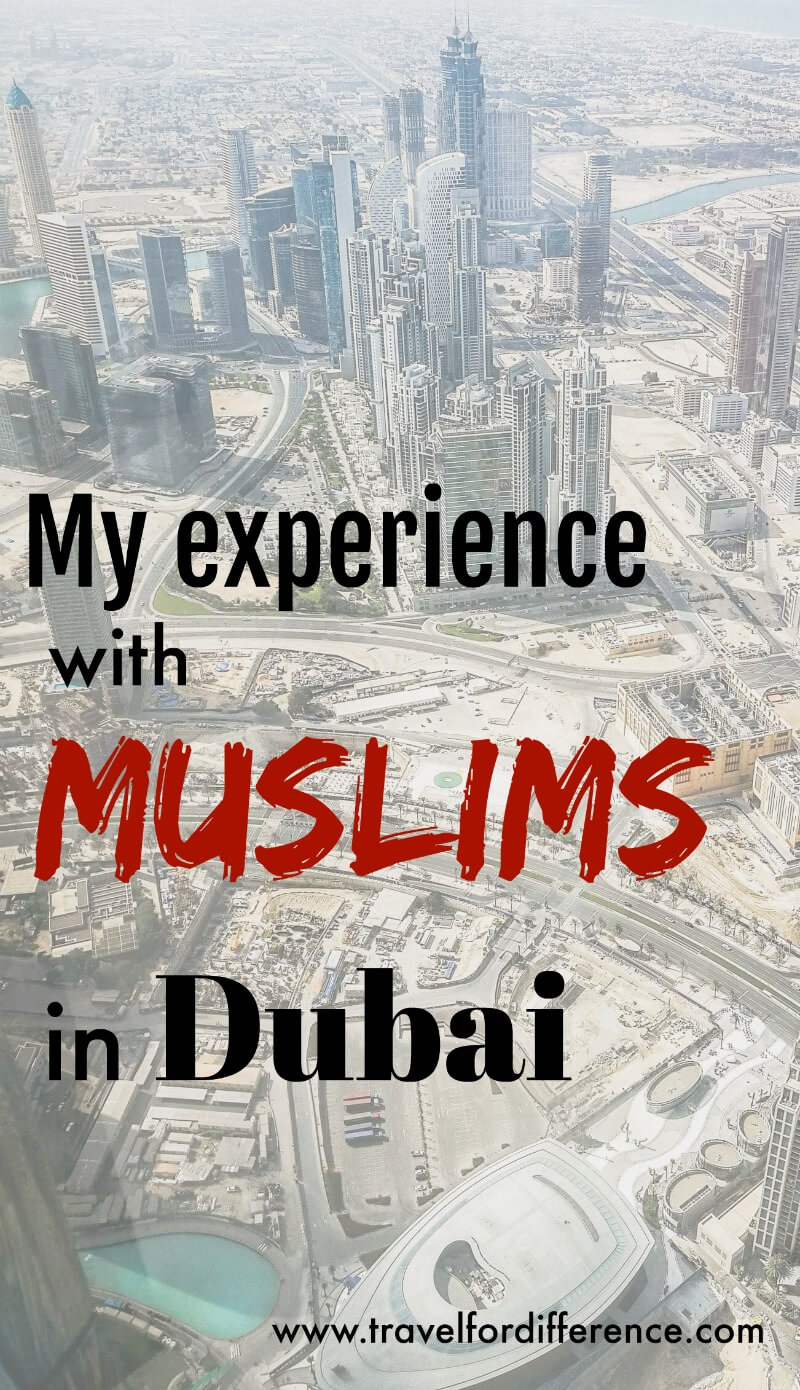