For me, ethical wildlife encounters are generally non-negotiable when it comes to travel (and life in general) and here in Negombo that was certainly no exception.

Before I visit any destination – no matter where I am in the world – I always research the web (like these amazing Sri Lanka travel guides) to ensure that the places I visit are ethical and have the right intentions.

Whilst here in Sri Lanka, I thought that what I was going to see was wildlife in the backwaters of Negombo… But there was one small aspect about this that I never found online. 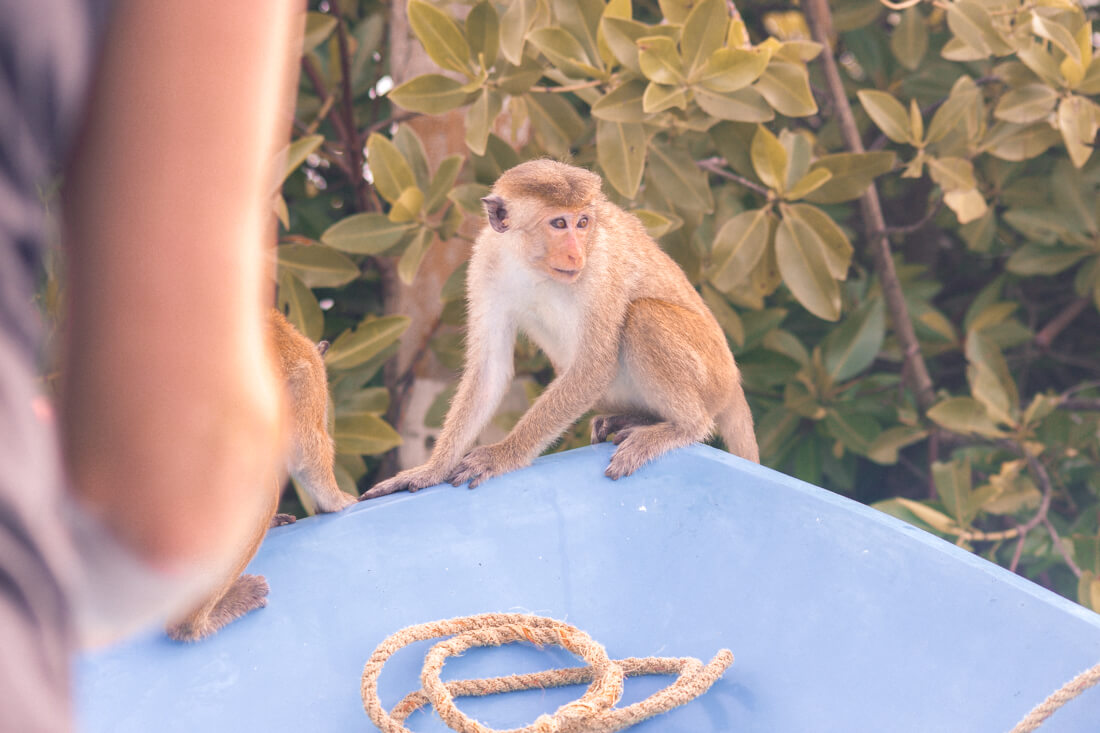 We had booked to go on a 2-hour private boat safari around the Muthurajawela Marsh.

The advertisement stated that we would “watch for herons, water monitors, monkeys and even crocodiles and otters” – All of which was going to take place around the protected wetlands reserve on a wildlife safari.

That’s what I thought too! For the most part, this tour was exactly as it stated; cruising around the beautiful backwaters watching all of the above…

Until we got to the monkeys. 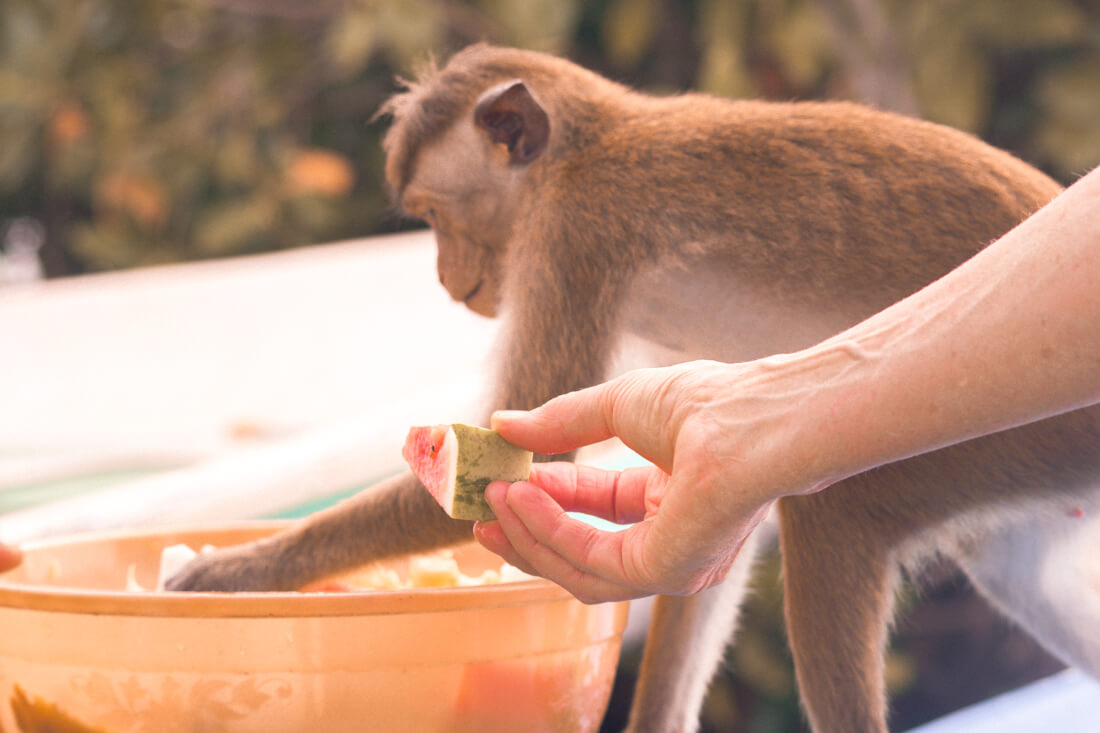 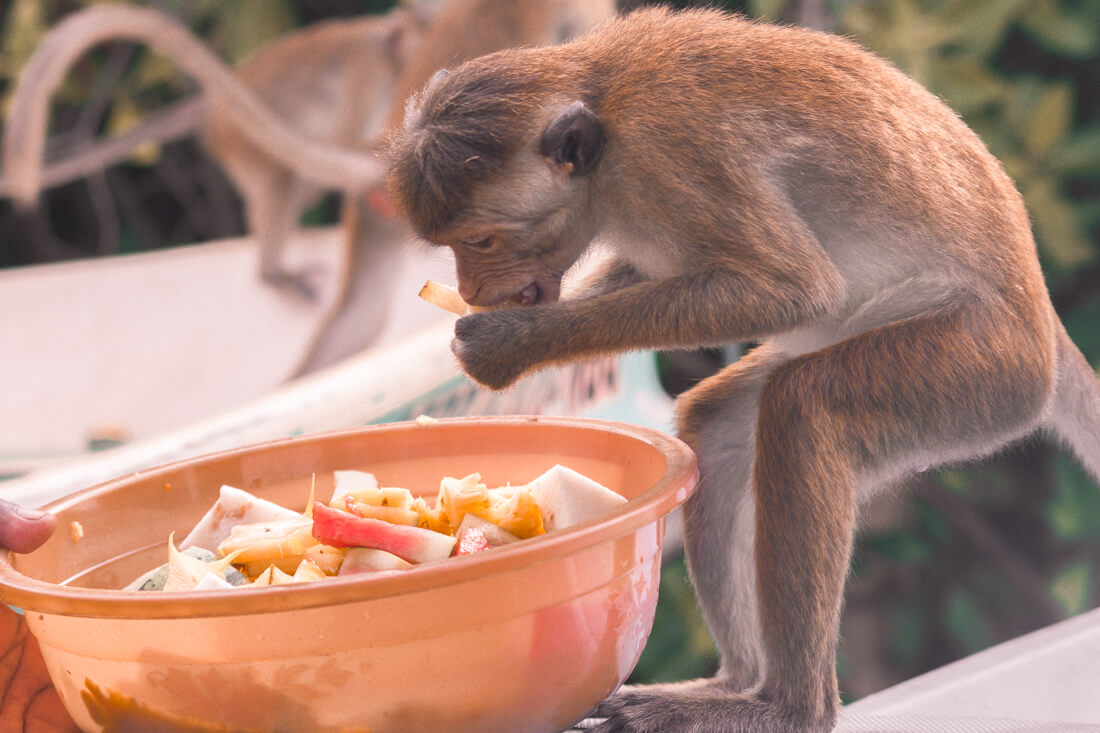 So during the tour, our lovely guide stopped on a sandbank surrounded by mangrove islands where he prepared an amazing fruit platter for us to eat in the water.

It was full of incredible local fruit which I thoroughly enjoyed, but the first red flag occurred when he said that the scraps would be going to the monkeys.

I still was not 100% sure what I was getting into nor did I think much of it at the time, as up until this point, everything we had encountered was totally wild and ethically treated. After the picnic, we drove to a small, mangrove island where a family of 50 inbred monkeys lived. Known to the locals as “Monkey Island”.

This breed of monkey is the Toque Macaque. Their diet consists of fruits, tree flowers, buds, and leaves and supplemented with birds, lizards, small invertebrates and the occasional crop. All of which is not accessible from the island they’re stranded on.

The island is also surrounded by salt water, so the monkeys have no water source.

No water… No food… And totally stranded…

I think you know where this is going. 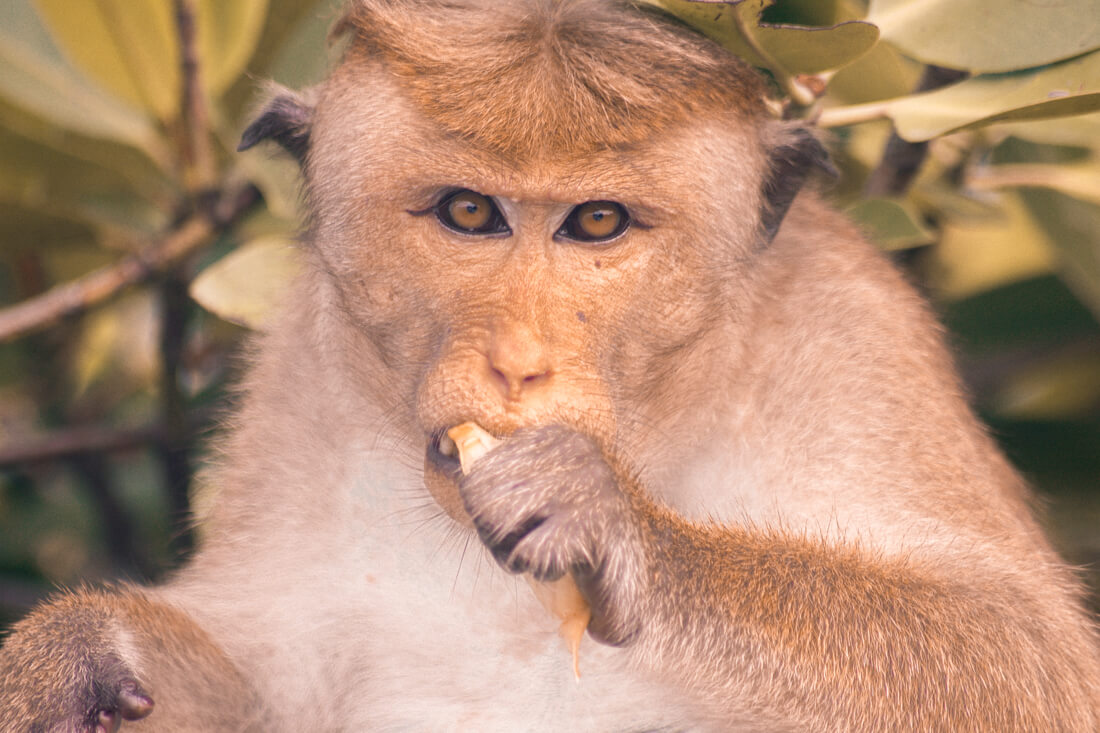 Our guide told us that 2 monkeys were placed here a few years ago – presumably for tourism purposes – but the number has now grown to 50.

So basically… They’re all related.

There was a 3-day-old baby there at the time, and I’m not going to lie, it was amazing to see this beautiful creature up close. But the more I thought about this little life, the more it broke my heart.

There is only one dominant male, and sadly he was known to frequently abuse other members of the troop in order to show his dominance. It was very visible when we were there, as some of them had very red, scratched faces that we were told was caused by his aggression.

It’s quite awful when you think about it, that these monkeys have no opportunity to escape when things get rough. Monkeys can’t swim, so they’re forced to stay on this tiny island regardless of the circumstances. From my memory, I also believe that the dominant male had actually killed some of the younger males in order to remove them from the troop – but I can’t be certain 100% about that…

But anyway! Every day the locals would travel out by boat to give the monkeys a big tank of water and a selection of food. Throughout the day, tourist boats travel to the island and give them their fruit scraps, as well as plastic water bottles as a top up. The problem with this, however, is that all of the scraps and bottles that are given to these monkeys simply gets thrown on the ground and in the water.

When I was there, the mangrove island and the surrounding water was entirely covered in food scraps and trash. The part that really concerned me though, was watching these monkeys pick up the water bottles and drink them like a human.

Normally, a Toque Macaque would travel daily to find fresh water, but unfortunately for them, the water is simply handed to them in a bottle that was made for human convenience.

I say “unfortunately”, because this is obviously not a life fit for a monkey.

Toque Macaques in southern Sri Lanka prefer to live in high trees, but for those that know a bit about mangroves, you’ll know that these are a very short plant that are incredibly low to the ground. 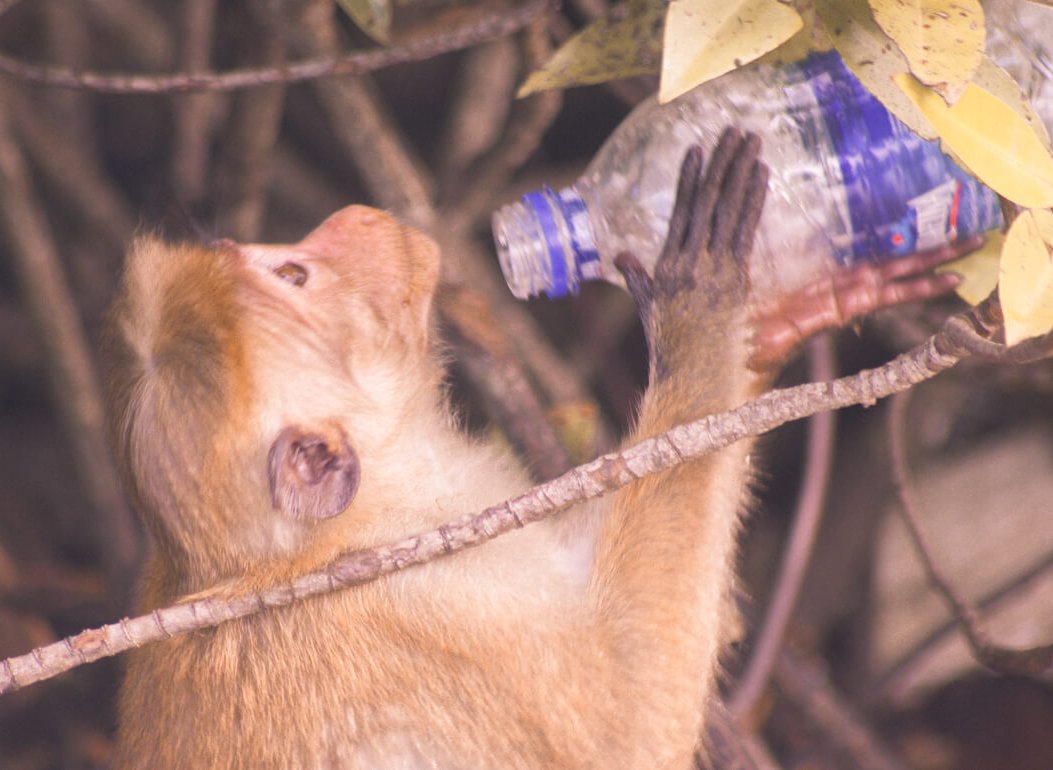 The sad reality of this situation is that these monkeys are listed as endangered according to the IUCN Red List, and instead of being cared for in an environment where they can naturally reproduce, they were placed in a tiny area that is now inbred populated.

The locals are woo-ing tourists into visiting the wetlands to see wild creatures (which is what majority of the tour consisted of) but they’ve brought these monkeys here in the hopes that this experience might be a little more appealing. Sure, they aren’t kept in a tiny cage in a zoo, but they are living somewhere that is totally unnatural and confined.

Their existence is 100% dependant on humans due to their lack of natural food and water, and I don’t know about you, but that doesn’t seem very wild to me! To be honest, when I was here I didn’t know exactly how to feel, but when I left and had the chance to truly think about what I experienced, the more disgusted I became.

I thought that unethical wildlife tourism was pretty easy to spot, but unfortunately, this was far from it.

I was completely fooled and manipulated into thinking that what I was going to see were some wild and free monkeys, but that certainly wasn’t the case.

It broke my heart to think that this was something that was added to an already inviting attraction in order to make it more exciting. When in reality Monkey Island did nothing but put a damper on a beautiful area of Negombo… 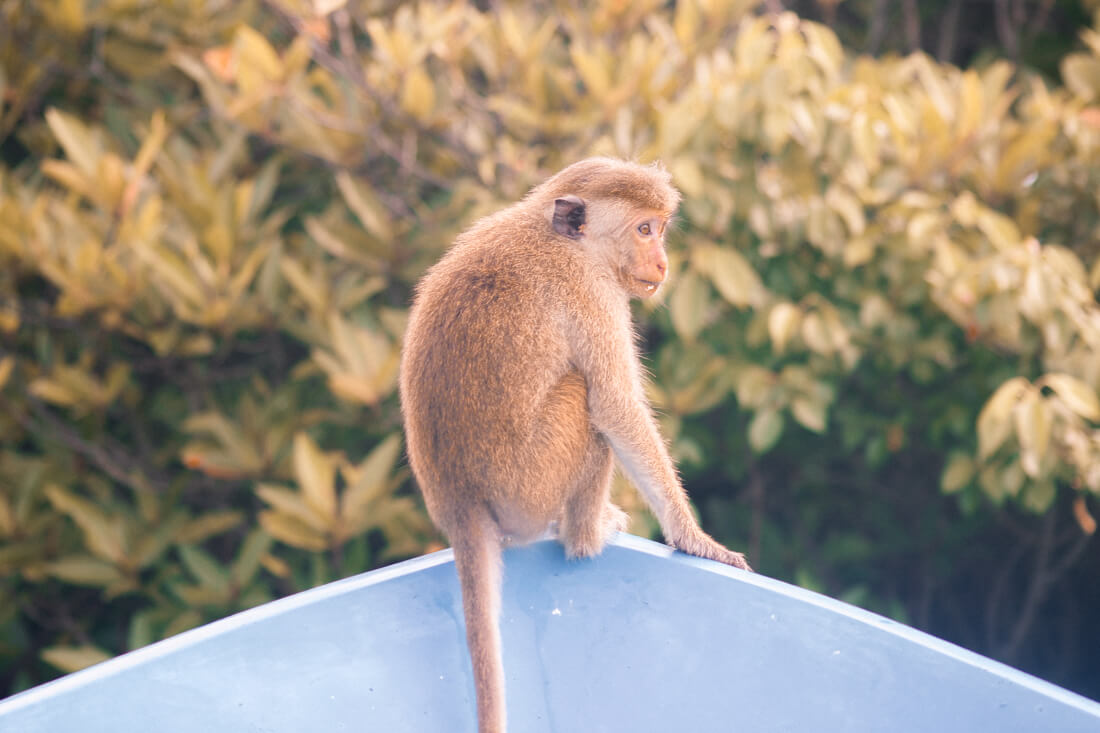 I guess this experience taught me that not only has unethical tourism reached a whole new level, but also that being an ethical traveller isn’t always as simple as it seems.

Monkey Island in Negombo was an eye opener… There’s no doubt about it!

Have you ever experienced something similar to Monkey Island? Or a different form of unethical wildlife tourism? I’d love to know!