Palm Oil Plantations are a controversial issue so well known in today’s society. I was aware of the global problem before my trip to Borneo, but after witnessing the destruction first-hand, my thoughts have been influenced more than ever.

Palm Oil is the most consumed vegetable oil in the world. It is used in everyday products that I can guarantee you’re using and consuming throughout your home; toothpaste, shampoo, cosmetics, confectionery and baked goods are a few prime examples of the ways we are contributing to the destruction and demolition of nature across Asia.

The exploitation of this oil is an extreme culprit of habitat degradation, deforestation and unfortunately, climate breakdown… They are global issues that are bound to impact the population, the animals and the environment in dramatic ways if they continue to be ignored.

The beautiful Malaysian state of Sabah is a dramatic contributor to the amount of Palm Oil consumed across the globe. The palm trees used to create the oil are not native to Malaysia, they were imported from South Africa due to a similar climate, but have since turned into a globally consumed product that has taken over the world.

Oil palms produce fruit at around 4-6 years of maturity, where they will continue to supply for a further 26 years. Once at the end of their life, the trees are bulldozed to make room for new plantations. The fruit of the oil palm is removed using a sickle knife on a large pole, transported to a processing facility and pulverised into the oil we know today. It is a physically demanding job for the workers involved, which is where the complications come in…

To the locals of Borneo, these plantations are a symbol of hope. The sheer amount of labour needed for this hand-driven process means that majority of the population has access to a job. The negative environmental implications are understandably out of mind, as these people are simply in search of a decent income. Palm Oil plantations cover 5.4 million hectares of Malaysian soil, with 1.54 million hectares found in the state of Sabah. This state is 7.36 million hectares in size, which means that 20% of its luscious jungle, farming and wildlife habitat has been completely destroyed…  There’s really no hiding the fact that this issue is swallowing Sabah by whole.

Not to mention that the native Bornean animals are decreasing at severely alarming rates. The Orangutan population has decreased by over 50% in the last 16 years… Their habitat is being lost by hectares, the Kinabatangan River is being polluted by sediment and silt, and these beautiful wildlife species are going to be critically endangered at the click of our fingers. Orangutans and Pygmy Elephants are frequently found wandering through the plantations in confusion of their whereabouts, where they are then taken from their environment and forced into potential confinement and rehabilitation. Proboscis Monkeys are in sanctuaries to keep their groups alive. Orangutans are starving at the loss of their habitat. And Pygmy Elephants are being poisoned and killed for wandering into plantations… It’s terribly sad that this issue is all a result of these major international corporations.

If things continue in such a destructive manner, these animals will be extinct in the next 5-10 years. After personally witnessing these beautiful, timid creatures enjoying their life in the wild, I really am struggling to understand the logic behind the constant devastation.

Whilst on our drive from Kota Kinabalu towards Sandakan, we were warned about the Palm Oil Plantations… I was aware that the drive was not going to be the most scenic after a certain point, but what I was faced with was far worse than my expectations. 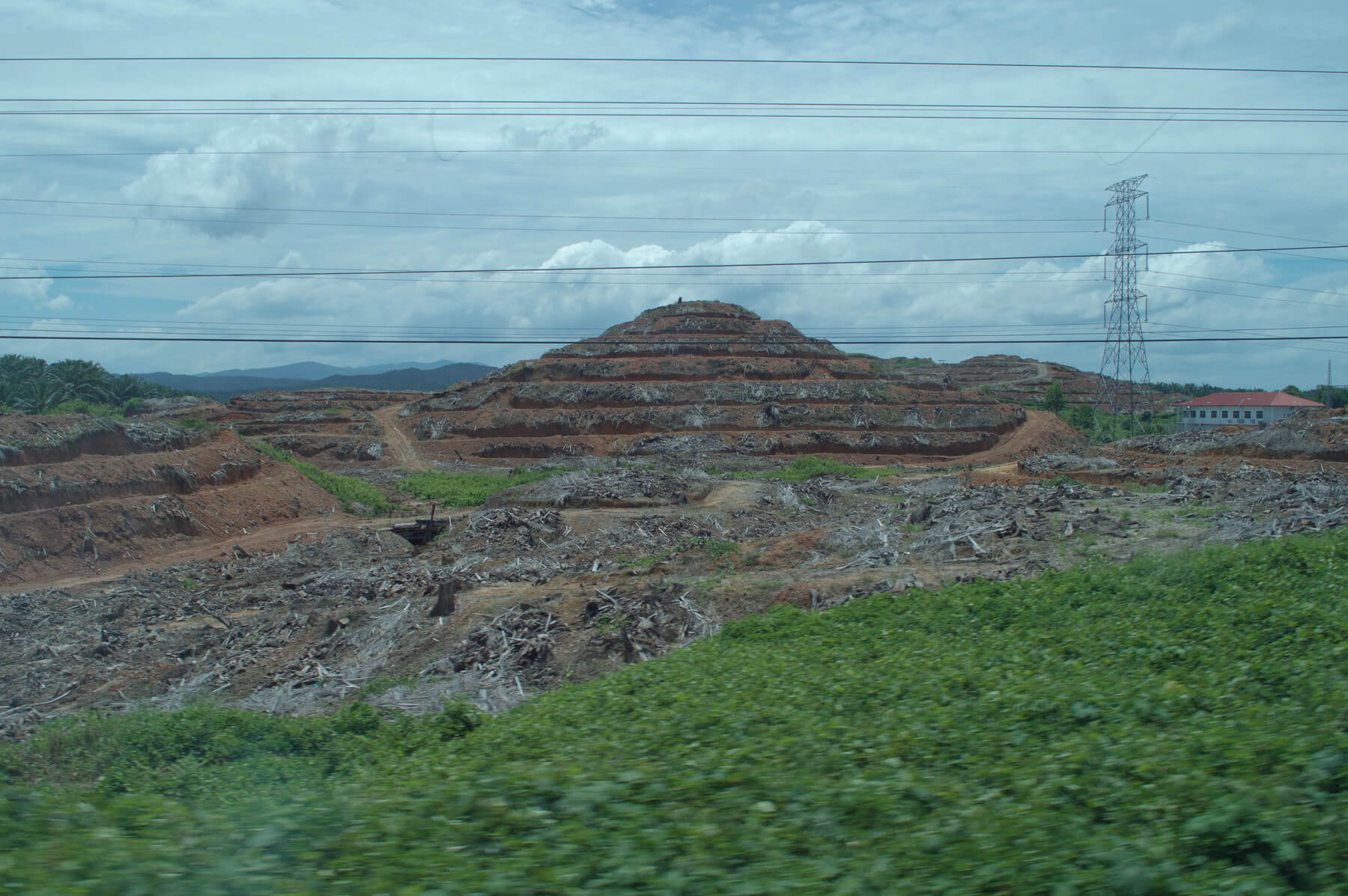 I spent the entire journey completely confused by the backbone of this madness. The tens of thousands of kilometres now submerged by palms used to be lush, rugged rainforest full of wildlife and a world like no other. Now, there is nothing left but a total man-made mess.

And that was just the beginning.

Our cruise down the Kinabatangan river really brought the reality right up to my nose. The palms were pushing through the rainforest and onto the banks of the river. One minute we were stopped looking at families of Macaque, Proboscis Monkeys and a gentle Pygmy Elephant, and a few metres down was the start of a plantation.

I really do fear what will happen next. I fear for the day that these animals will be completely out of hope. As heartbreaking as it is, it really made me realise that these huge corporations and international markets are the entire problem. The residents of Borneo merely want to survive, grow their country and live a life worthy of living.

The goal for Malaysia is to become a ‘developed’ country by 2020, and unfortunately, at this rate, that will fail to happen without the production of Palm Oil; it is the #1 form of income for the state of Sabah, and #5 for the country of Malaysia.

They truly believe that in the future Palm Oil will replace all fossil fuels. They believe it has completely shaped the country they call home, and that it will continue to as things consistently grow. It’s a difficult situation when people’s lives are dramatically improving, whilst the wildlife and environment drastically diminish.

This trip has really torn me in two. On one hand, I see incredibly beautiful, endangered animals soon to be extinct due to habitat degradation. On the other, I see locals who don’t want to be a developing country any longer. They, of course, don’t want their native animals to be just a symbol in a museum, but they really do see these plantations as hope for the future.

Since this trip, I have wholeheartedly been torn between the decision of humanity and the environment; a decision we should never have to make. Palm Oil itself is not a bad product, it’s the way that it’s being processed that is the problem.

To start with, I think it’s really important that we reduce our Palm Oil consumption wherever possible (the unsustainable kind at least). We need to demand that companies start sourcing their Palm Oil responsibly — without any slip-ups — as I believe that only then will this problem truly be resolved. Deforestation has to stop.

I’ve made the decision to try and remove unsustainable palm oil in every way that I can. And in the meantime, I believe this is a discussion that really needs to be had. There has to be another way for a country of the global south to improve its economy, living standards and overall wellbeing, without creating such an environmentally destructive issue.

Throughout my entire trip, I was feeling utterly hurt for the beautiful animals whose lives were eventually going to come to an end, as well as for the people who were simply in search of an income. I really did leave this beautiful part of the world with an extremely confused head, and an even heavier heart.

[ READ NEXT: A list of Palm Oil Free Product – How you can reduce your impact! ]